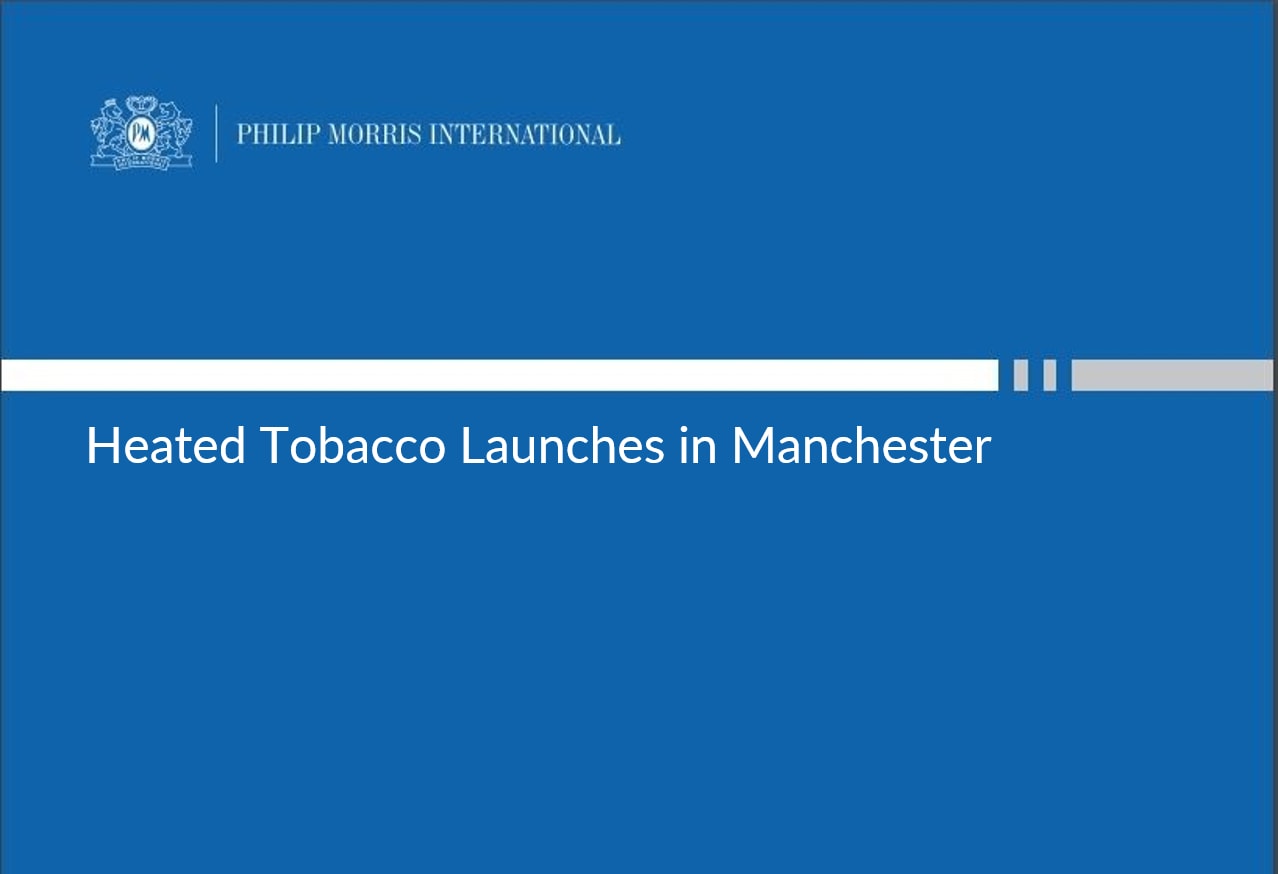 • Manchester becomes the first city outside of London to see the launch of IQOS heated tobacco technology. 2 new IQOS stores, a team of local recruits and 50+ retailers stocking HEETS in the city
• IQOS expansion designed to help 360,000 smokers in Greater Manchester switch from cigarettes; 7 in 10 smokers who try IQOS heated tobacco for a week give up smoking completely
• Research last year found that Greater Manchester might not go completely smoke free until 2034, a decade after the first parts of England

Manchester has become the first city outside London to see the launch of IQOS Heated Tobacco technology. Two new IQOS stores have opened in St Ann’s Square and Princess Street, with heated tobacco sticks (called ‘HEETS’) now available in 50+ retailers across the city. A specialist local team has been recruited to help Greater Manchester’s 360,000 smokers1 understand how best to switch from cigarettes to less harmful alternatives.

Expansion in Manchester follows the successful launch of IQOS in London with device sales reaching a total of 100,000 over the past two years.
IOQS heated tobacco is a new technology that allows smokers to heat rather than burn tobacco. This removes on average 95% of the harmful toxins found in traditional cigarette smoke.2 IQOS is the result of £4bn research and development investment by Philip Morris International over the past decade. There are now over 10 million IQOS consumers globally.3

Recent research by Frontier Economics estimates that Greater Manchester will not go completely smoke free until 2034.4 Other parts of England, such as Bristol and York, are due to go smoke free a decade earlier.

Peter Nixon, Managing Director of Philip Morris Limited, believes expanding IQOS will help the 1 in 6 people who smoke in Manchester switch from cigarettes to smoke-free alternatives at a much faster rate.
He said: “I am confident that IQOS will be a game changer for smokers in Manchester with heated tobacco technology offering a better alternative to cigarettes. This new product has been developed following £4bn of investment and a decade of research. I believe the impact of IQOS could accelerate Manchester into becoming a smoke-free city.”

2Compared to the smoke of a reference cigarette (3R4F). It does not necessarily equal a 95% reduction in risk. Source: Average of the reductions in the concentrations of a broad range of harmful and potentially harmful chemicals measured in the IQOS aerosol compared to those measured in the smoke of more than 1,600 cigarette brands in over 40 countries between 2008 and 2017. Aerosol and smoke collections performed under the Health Canada Intense machine-smoking regime. Reduction calculations exclude nicotine.

Notes to Editors
The Manchester stores are located at:

Philip Morris International: Delivering a Smoke-Free Future
Philip Morris International (PMI) is leading a transformation in the tobacco industry to create a smoke-free future and ultimately replace cigarettes with smoke-free products to the benefit of adults who would otherwise continue to smoke, society, the company and its shareholders. PMI is a leading international tobacco company engaged in the manufacture and sale of cigarettes, smoke-free products and associated electronic devices and accessories, and other nicotine-containing products in markets outside the U.S. PMI is building a future on a new category of smoke-free products that, while not risk-free, are a much better choice than continuing to smoke. Through multidisciplinary capabilities in product development, state-of-the-art facilities and scientific substantiation, PMI aims to ensure that its smoke-free products meet adult consumer preferences and rigorous regulatory requirements. PMI's smoke-free IQOS product portfolio includes heat-not-burn and nicotine-containing vapor products. As of March 31, 2019, PMI estimates that approximately 7.3 million adult smokers around the world have already stopped smoking and switched to PMI’s heat-not-burn product, which is currently available for sale in 47 markets in key cities or nationwide under the IQOS brand.