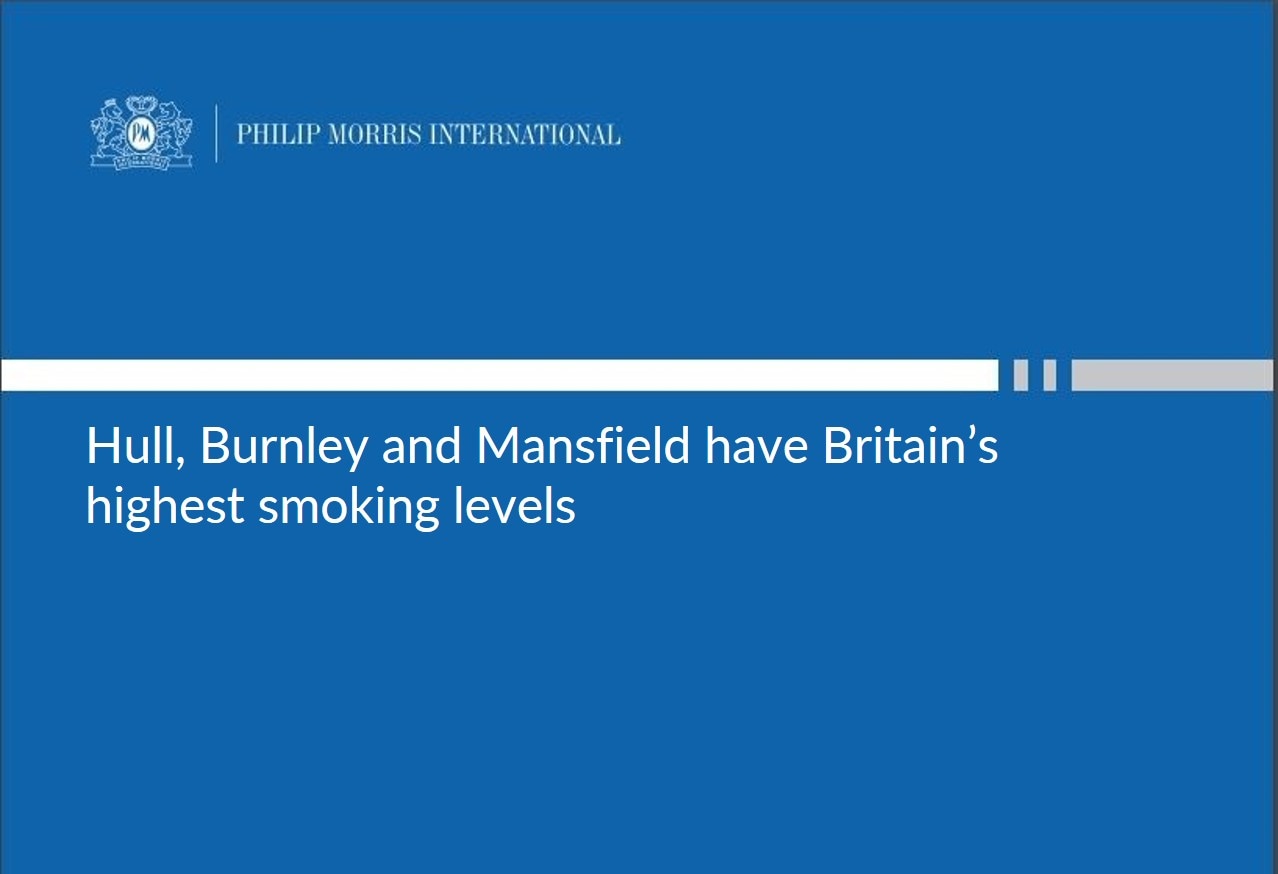 Hull, Burnley and Mansfield have the highest smoking levels in Britain according to new analysis by Philip Morris Ltd (PML). The results show that out of the 100 seats with the highest smoking prevalence, 64 are Labour-held seats, 16 Conservative and 15 SNP. Almost two thirds of the seats in the bottom 100 are in the North (44) and Scotland (16), with 20 in the South, 15 in the Midlands and 5 in Wales. 4 of the 10 seats with the highest smoking levels are Conservative held and 6 are Labour seats, with 4 of these 10 in the South East. PML has created the Unsmoke Constituency Heatmap to rank every Parliamentary seat in Great Britain, using the latest statistics from the Office for National Statistics (ONS)1. The results can be found here.

The Unsmoke Constituency Heatmap shows wider variations by political party:
• Labour held constituencies of Kingston upon Hull North and Kingston upon Hull East shared the highest smoking levels (26.1%) followed by Labour held Burnley (24.8%) and Conservative held Mansfield (23.1%)
• Kenneth Clarke MP’s Conservative seat, Rushcliffe, had the lowest levels in the whole of Britain (3.6%) followed by current Liberal Democrat Leader, Sir Vince Cable MP’s Twickenham constituency (5.9%). Jeremy Hunt MP’s seat of South West Surrey was fourth in the rankings (7.1%).
• Nearly 70% of SNP seats are in the bottom third of the prevalence rankings. No seats in the top 100 are represented by the SNP. All of Plaid Cymru’s 4 seats are in the bottom half of the rankings.
• In the 100 seats with the lowest smoking levels, 79 are Conservative held, 17 Labour and 4 Lib Dem.

Mark MacGregor, External Affairs Director at PML, believes this is the first time most MPs will be made aware of the smoking levels in their constituencies and hopes the results will help decision makers to concentrate on support for smokers: “These results show the huge variations in smoking levels across the different parts of Britain. We hope MPs will use the figures to better target help for smokers locally, particularly in seats with the highest smoking prevalence. If the Government is to meet its ambitious target, one of the keys to getting smoking prevalence down will be ensuring smokers who don’t quit, understand that alternatives, like e-cigarettes and heated tobacco, are significantly better than continuing to smoke.”

1 ONS: Smoking habits in the UK and its constituent countries, July 2019, Dataset.

Methodology
This analysis takes ONS 2018 smoking prevalence rates, currently listed by local authority, and maps them onto Parliamentary constituency boundaries.
The analysis uses data from Table 4 of the ONS 2018 “Smoking habits in the UK and its constituent countries” data set. This is available here.

Philip Morris International: Delivering a Smoke-Free Future
Philip Morris International (PMI) is leading a transformation in the tobacco industry to create a smoke-free future and ultimately replace cigarettes with smoke-free products to the benefit of adults who would otherwise continue to smoke, society, the company and its shareholders. PMI is a leading international tobacco company engaged in the manufacture and sale of cigarettes, smoke-free products and associated electronic devices and accessories, and other nicotine-containing products in markets outside the U.S. PMI is building a future on a new category of smoke-free products that, while not risk-free, are a much better choice than continuing to smoke. Through multidisciplinary capabilities in product development, state-of-the-art facilities and scientific substantiation, PMI aims to ensure that its smoke-free products meet adult consumer preferences and rigorous regulatory requirements. PMI's smoke-free IQOS product portfolio includes heat-not-burn and nicotine-containing vapour products. As of March 31, 2019, PMI estimates that approximately 7.4 million adult smokers around the world have already stopped smoking and switched to PMI’s heat-not-burn product, which is currently available for sale in 47 markets in key cities or nationwide under the IQOS brand.
For more information, please visit www.pmi.com and www.pmiscience.com.