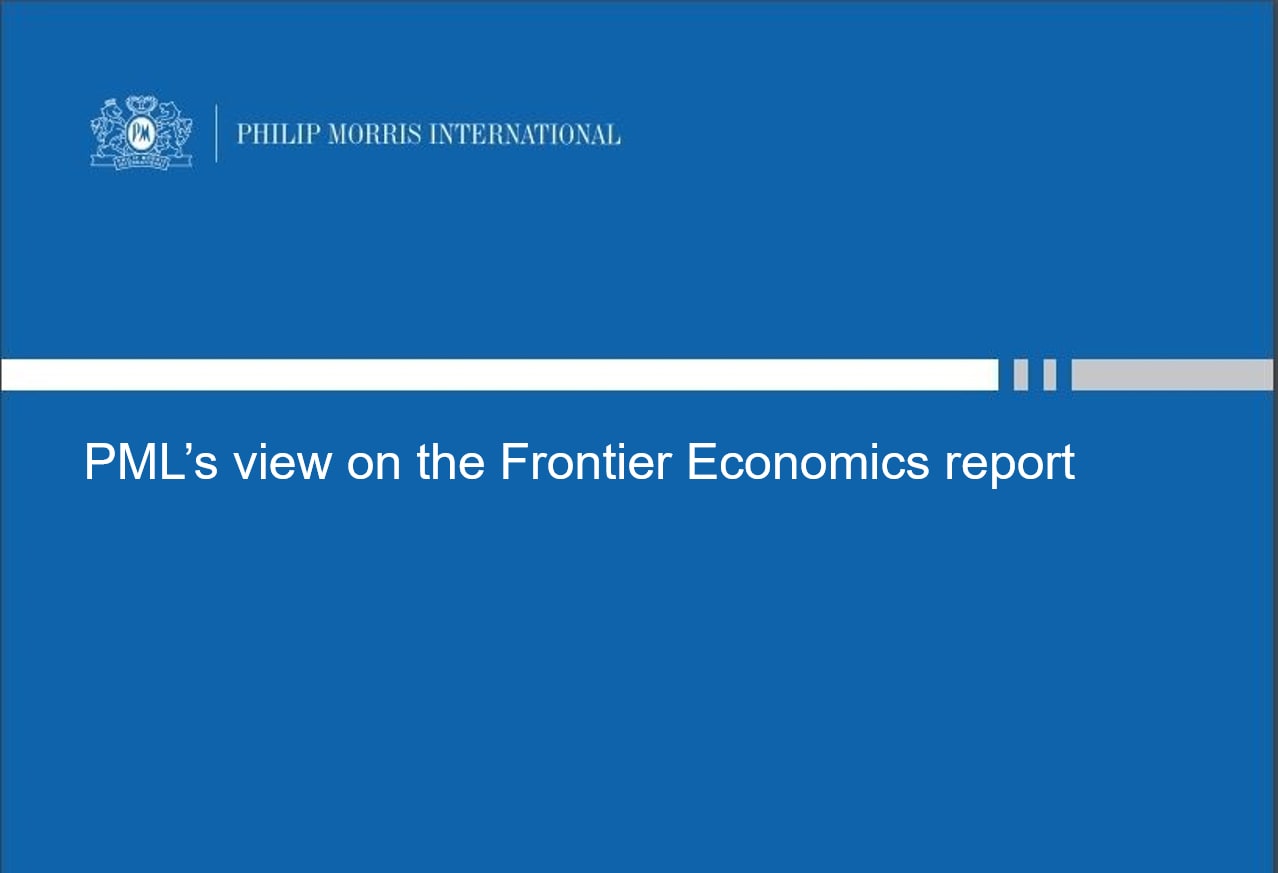 In recent years England has produced pioneering scientific research on tobacco harm reduction and successfully reduced smoking rates faster than most other countries. The new Tobacco Control Planfor England looks forward to the creation of a ‘smokefree generation’.1 At Philip Morris International (“PMI”) we welcome the Government’s success and global leadership on this issue.

PMI is also committed to a smoke-free future. Our ambition is to replace cigarettes as soon as possible,persuading smokers who would otherwise continue to smoke, to switch to smoke-free products instead. We would like to play our part in helping the Government to achieve its goals as soon as possible. Worldwide, it is our ambition that by 2025 at least 30% of our volumes will come from smoke-free products (assuming PMI maintains its market share). In England, we think that figure could be significantly higher.

We recently commissioned Frontier Economics to help understand the potential timescales for England to become smoke-free.

Frontier Economics’ central forecast is for a smoke-free England by 2040
Frontier Economics’ central forecast, based on long term trends, is for the percentage of people who smoke to fall to 5% of the English adult population (the Government’s definition of smoke-free) by 2040. In their most optimistic scenario, they estimate that smoking could be reduced to 5% as soon as 2029. This would require the more rapid decline in smoking in England since 2012, which coincided with the increased popularity of e-cigarettes, to be sustained.

To achieve this 2029 date would need an extra 2.5 million smokers to stop smoking beyond those expected to quit anyway, which is equivalent to approximately 210,000 each year. The report considers ways to assist these extra 2.5 million smokers to quit, including greater use of NHS StopSmoking services, and increased uptake of potentially less harmful smoke-free alternatives including e-cigarettes and other emerging technologies (almost 4 million smokers worldwide have switched to heated tobacco since 2014).

The report reveals that about 40,000 smokers quit through NHS Stop Smoking services in 2016, compared to a peak of around 100,000 in 2011, and that the number of new vapers is also declining. To secure an extra 210,000 quitters each year will therefore require significant changes, such as:

- Increasing the numbers of smokers quitting via NHS Stop Smoking services by over 500%;
- Reversing the decline in smokers switching to e-cigarettes;
- Some other effective intervention or new technology; or
- Some combination of the above.

Quitting is always best, but switching to smoke-free alternatives can reduce smoking rates and cigarette consumption
We are clear that quitting completely is always best, and e-cigarettes and other alternatives are not risk free. However, switching is a better option than continuing to smoke. The potential for smoke-free alternatives to drive down smoking rates and cigarette consumption is evident from experience in a number of countries:

- In the UK, the anti-smoking group, ASH, estimates that 1.5 million British adults now use e-cigarettes having quit smoking altogether.2 Frontier Economics have concluded that e-cigarettes have made a “material contribution” to the faster decline in smoking in England since 2012. We hope that this will be further boosted by Public Health England’s recent ‘Stoptober’ campaign.3

- In Japan, smoke-free heated tobacco products were first launched by PMI in 2014, under the IQOS brand. Heated tobacco has since grown rapidly, with competitors launching rival products, and IQOS becoming PMI’s leading brand in Japan. In October 2017, PMI’s heated tobacco sales represented almost 15% of combined sales of cigarettes and heated tobacco in Japan (and almost 20% in the city of Sendai).
- In Sweden, snus, another smoke-free tobacco product, is legal and popular, unlike the rest of the EU, where it is banned. Sweden has the lowest smoking rate in the EU, and a lung cancer rate which is far below the EU average. Swedish smokers switching to snus has been widely credited for this.4

Our contribution
Encouraging millions more people who would otherwise continue to smoke to switch will be important if the Government is to meet its targets as early as possible. We believe that we can play a significant part in helping smokers to switch.

We have developed and are developing a range of smoke-free alternatives that do not burn tobacco and do not generate smoke. As the vast majority of toxicants associated with smoking related diseases are generated by combustion, products which deliver nicotine and satisfaction without burning tobacco have significant potential to be less harmful. We conduct rigorous scientific research to prove the harm reduction potential of our products, and welcome independent verification. We want all smokers to be confident that switching to smoke-free products represents a better choice than continuing to smoke. Government and independent scientific experts can perform a crucial role in providing that reassurance.

Next steps
We want a smoke-free society as soon as possible. Frontier Economics’ report shows that it can be accelerated, but more intervention is needed.

To do so requires smokers to be given far more information about all the ways to quit, including smoke-free alternatives. Public Health England’s ‘Stoptober’ campaign, to encourage smokers to switch to vaping, is a very positive initiative. We would welcome more such campaigns.

We also welcome the Tobacco Control Plan’s commitment to re-appraise current regulation as part of the EU withdrawal process. We recommend that the regulation of smoke-free products is reviewed as a priority. The science and evidence base around e-cigarettes has developed considerably since the EU Tobacco Products Directive was introduced in 2014, while more evidence on heated tobacco products continues to emerge. Regulation that more clearly distinguishes e-cigarettes and heated tobacco products from combustible tobacco could make a positive contribution to public health by encouraging smokers who do not quit, to switch.

We hope that Frontier Economics’ findings will be of interest, and that it can contribute usefully to the debate on how we can encourage more smokers to quit or switch.