What would you prefer public policy to be based on?

Philip Morris International believes that with the right regulatory encouragement and support from civil society, cigarette sales can end within 10 to 15 years in many countries. Alongside existing measures to encourage cessation and prevent initiation, scientifically substantiated smoke-free products* can play an important role in this public health opportunity. These products are based on science. Their regulation should also be based on science. 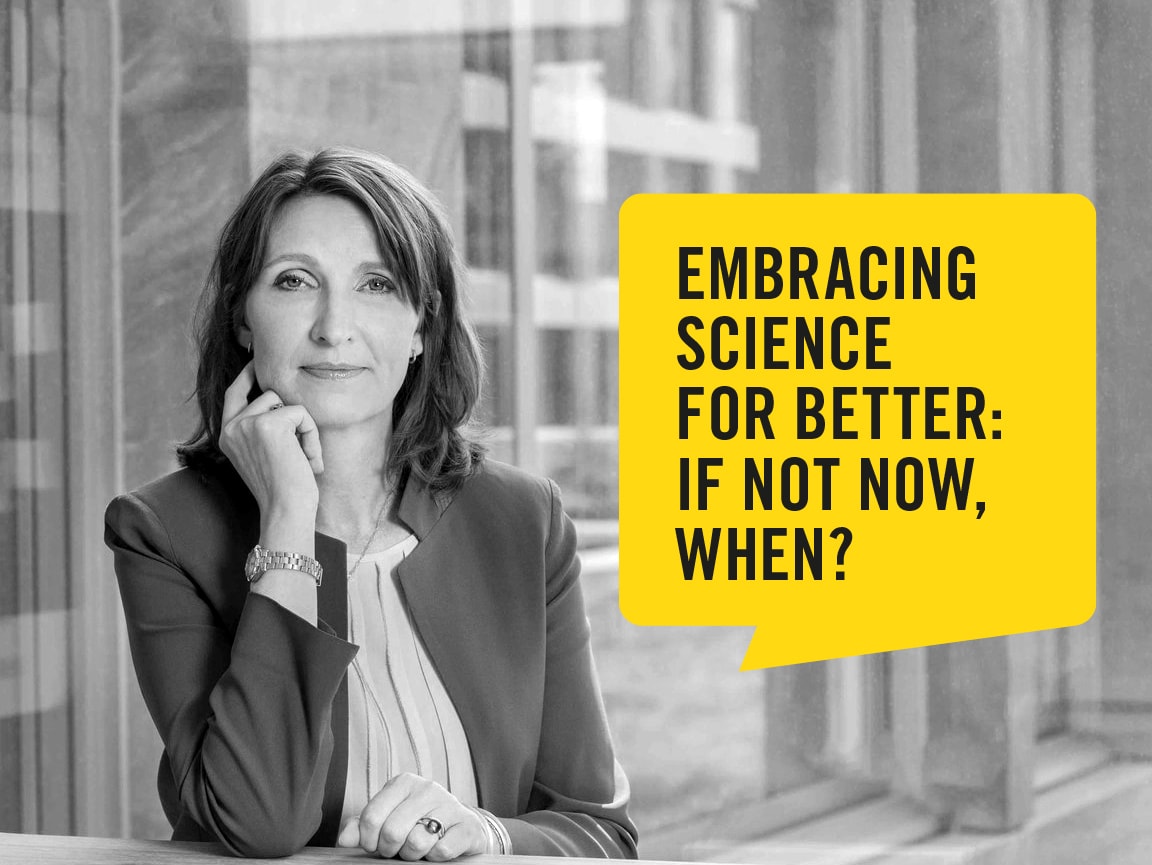 Science should be front and center in policymaking, business, and everyday life, as it can help make significant strides in our collective efforts to address the world's most pressing problems. But society has yet to embrace its fullest potential.

In a recent op-ed, Dr. Moira Gilchrist, Vice President Strategic & Scientific Communications at Philip Morris International, asks what is holding us back.

Some people may think Philip Morris International (PMI) is only a cigarette company. But in 2016, the company announced its new purpose: to deliver a smoke-free future by focusing its resources on developing, scientifically substantiating and responsibly commercializing smoke-free products that are a better choice for adult smokers than continued smoking, with the aim of completely replacing cigarettes as soon as possible. Since then, the company has disrupted its business from the inside out, and is leading the industry with its unprecedented transformation. Earlier this year, the company’s Board of Directors re-affirmed PMI’s commitment to achieving a smoke-free future in the letter to shareholders contained within their 2020 Proxy Statement.

Quitting tobacco- and nicotine-containing products altogether is the best choice any smoker can make. But many don’t. For this large population of adult smokers, advances in science and technology have enabled the development of smoke-free alternatives that can be a better choice than continued smoking.

A smoke-free future—and with it the opportunity to improve public health—can only be achieved together with governments and the support of civil society. Sensible regulation of these products is key. It should be based on scientific evidence rather than ideology, on facts rather than fiction, and on truth rather than opinion. The regulation needs to strike the right balance. This means it needs to recognize the role of smoke-free alternatives in helping those adults who would otherwise continue to smoke to move away from cigarettes, while protecting youth and non-smokers.

A need for science at the heart of decision-making

People rely on science for their day-to-day decisions, and they expect their governments to do the same when drawing up policies. Earlier this year, PMI commissioned an online survey by independent research firm Povaddo. It was completed by 19,100 adults across Europe, Asia, the Americas, and Africa between June and July 2020. Our intention? To better understand people’s interest in science, their access to and understanding of scientific information, and how they rate various sources of scientific knowledge. We published the results in our white paper “In Support of the Primacy of Science.”

The white paper illustrates the public’s confidence and interest in science. For example, 77 percent were hopeful that advances in science will ultimately deliver solutions for many of the world’s most pressing problems. 79 percent of respondents said that when they heard about a new scientific development or study, they typically sought out more in-depth information or watched out for other reports.

However, almost half of the respondents stated that they found it difficult to access reliable information about scientific developments and relevant studies, including 10 percent who found it very difficult. And 41 percent thought their government was doing a poor job in communicating unbiased and reliable information about the latest scientific developments.

The role of governments

The vast majority of those surveyed (84 percent) wanted their government to take the latest scientific evidence into account when making policy. But not all respondents were convinced this is currently the case.

Only 51 percent believed their government was doing a good job of ensuring that science informed its decision-making process.

Businesses must also be led by science

When it comes to the role businesses play in the application of science, 85 percent of adults agree that companies should develop science-based solutions to some of the biggest problems facing society today, and nine out of 10 people expect companies to continually research and innovate to improve their product in the interest of public health.

We hope our white paper will spark a broader conversation about the role of science and its importance in the decision-making process. The findings indicate that people want science to take center stage when it comes to public policymaking.

When science is not leveraged to its full potential, when government officials do not have access to accurate and non-misleading scientific information, there is a risk of a void developing that can quickly be filled by ideology, politics, and unsubstantiated beliefs. This hinders progress. Science shapes our world, and the world’s citizens want scientific facts to sit at the heart of the decisions impacting them. That’s why science should also shape policy.

PMI’s whitepaper: “In Support of the Primacy of Science”

*What are smoke-free products?

When we talk about smoke-free products, we mean nicotine-containing alternatives to combustible cigarettes for adults who would otherwise continue smoking. Some do not burn tobacco, such as heated tobacco or snus, while others do not contain tobacco at all, such as e-vapor products.