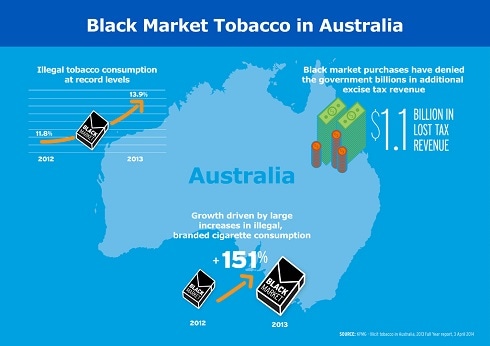 Australia’s plain packaging law is an unprecedented destruction of brands.  Australia’s experiment has dismantled a fundamental characteristic of a competitive marketplace and since its introduction, research shows it has not reduce adult or youth smoking rates. Consumers aren’t smoking less, they are just buying cheaper alternatives or turning to branded packs available on the black market.

As a result of the Australian government’s experiment, the reality is now that the only branded cigarette you can buy in Australia is an illegal one.

In fact, research conducted by KPMG in Australia found that total tobacco consumption has increased despite years of declining consumption.  KPMG also found that the level of illegal consumption of tobacco reached record levels, growing from 11.8% in 2012 to 13.9% in 2013.  The key driver of this growth has been a 151% increase in the consumption of illegal, branded tobacco.  This level of the black market activity equates to loss of AUD1.1 billion annually to the Australian treasury.

The key driver of this growth has been a large increase in the consumption of illegal, branded cigarettes, primarily in the form of contraband. From 2012 to 2013 volumes of unbranded illicit tobacco (known locally as “chop chop”) has declined by 31%, while branded tobacco products have increased by 151%.

The illicit brand Manchester continues to be the largest illicit white brand in Australia representing 1.5% of the total manufactured cigarette consumption.  If it were sold legally in Australia it would an equivalent legal market share of 1.7% based on the Q4 2013 empty pack survey results.  For the full year 2013, its legal market share would have been 1.4%.

If these black market purchases had been made in the legal market, the government would have collected AUD1.1 billion in additional excise tax revenue.