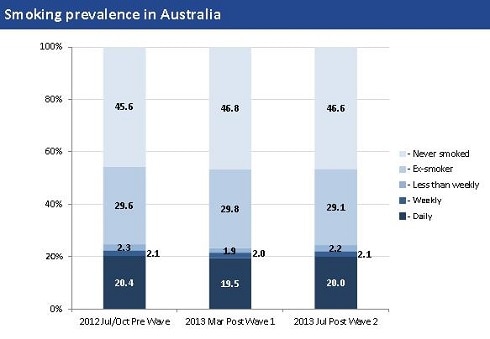 The Australian Government was clear when plain packaging was implemented “that there is some level of experiment...” (Interview with Nicola Roxon, Former Federal Minister for Health, Radio 3AW, “Mornings”, April 8, 2011) and that “data was unavailable on whether the introduction of plain packaging in Australia had hit cigarette sales.” (Tanya Plibersek, Australia Minister of Health, The Australian, July 15, 2013).

For the first time since the implementation of this experiment we now have hard data to replace the anecdotes and predictions about its true impact and the data demonstrates that since the introduction of this policy the black market has grown while consumption and smoking rates of tobacco overall has not declined.

“Over the timeframe of the analysis, the data does not demonstrate that there has been a change in smoking prevalence following the introduction of plain packaging despite an increase in the noticeability of the new health warnings.”

Since the Introduction of Plain Packing the Black Market has Grown

Before plain packaging came into effect, research predicted that the policy was likely to further incentivize illegal traders of tobacco and lead to an increase in branded tobacco products on the black market.  Since plain packaging was introduced on 1 December 2012, data show that these predictions have become reality.  KPMG’s report, commissioned by the major tobacco manufacturers operating in the country, on illegal tobacco in Australia found: