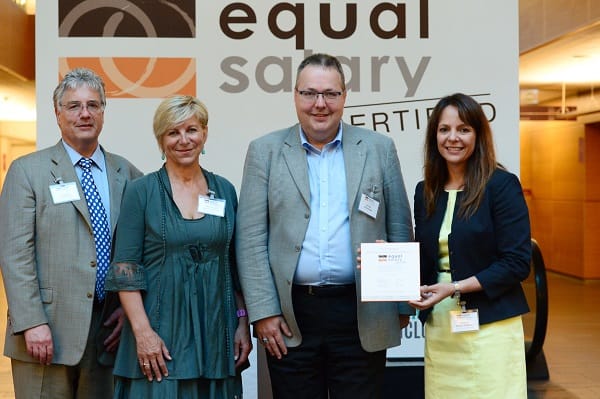 Philip Morris International (PMI) is the first multinational company in Switzerland to commit to equal pay for men and women and obtain the EQUAL-SALARY label. With this certification, the company sets itself apart as a top employer where principles of fairness, diversity and inclusion are the foundation for success.

Following the company’s successful completion of the certification procedure, the EQUAL-SALARY label was awarded today to Philip Morris International in the presence of the Minister of Economy of the Canton Vaud, Philippe Leuba, PMI employees, and representatives of economic associations (DEV, CVCI).

On this occasion, Jim Mortensen, Senior VP, Human Resources Philip Morris International, said: "Our success as a company depends on a talented and diverse workforce – where individuals enjoy opportunities to learn, grow and prosper in their career. This requires that we provide fair and equal remuneration between men and women and, at PMI, our values and principles call for nothing less. We are committed to fostering an inclusive and dynamic workforce and are proud and pleased to be recognized as the first multinational company in Switzerland to apply the principles of EQUAL-SALARY".

While most companies claim to pay women and men the same, the gender pay gap is still close to 19% in Switzerland. Part of the gap, about 60%, is due to explainable factors, such as personal qualifications and factors related to position and the company’s structure. About 40% result from discriminatory factors.

Launched 10 years ago, EQUAL SALARY-was incorporated as a foundation 5 years ago. André Schneider is its president. Véronique Goy Veenhuys is the founder and CEO. EQUAL-SALARY has run more than 30 certification procedures, impacting nearly 15,000 employees. Most certified companies have renewed their commitment, demonstrating a strong will to communicate the values of fairness, which builds trust and demonstrates respect towards employees. As the first and only certification that focuses on equal pay for women and men, EQUAL-SALARY is highlighted in the report on Gender Pay Gap of the European Commission*.

Similar to an ISO for wages, the EQUAL-SALARY process includes two phases. External experts are key. First, the University of Geneva runs a statistical analysis of salary data given the candidate’s salary policy. Second, if the results show an overall gender pay gap under 5 percent, an audit is contracted with the SGS, who certifies the conformity of the process. In this phase, SGS both assesses the company’s overall commitment to equal pay, and its implementation in HR processes. In order to be fully inclusive, employees are involved through interviews and surveys. It allows organizations to check and communicate that they pay women and men equally. It is a practical solution to achieve transparency, while preserving confidentiality.

Having obtained the EQUAL-SALARY label, the company is able to communicate internally and externally Good Governance practices as a factor to attract and retain talent. .

Support of the Swiss Confederation

EQUAL SALARY is a non-profit organization.

The Swiss Confederation has supported its development through the financial aid granted by the Federal Office for Gender Equality (FOGE).