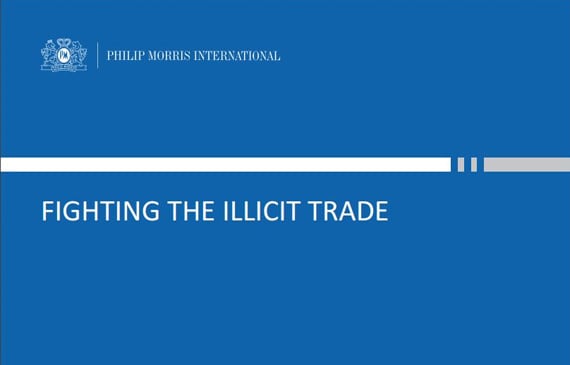 The Protocol to Eliminate Illicit Trade in Tobacco Products (Protocol), developed under the WHO’s Framework Convention on Tobacco Control (FCTC), was adopted in November 2012. The Protocol must be ratified by 40 FCTC signatories to enter into force. In almost four years, only 20 signatories, 19 countries and the EU, have ratified the Protocol.

“PMI has been a supporter of the anti-illicit trade Protocol since its adoption in 2012. The WHO’s Protocol paves the way for solutions that have already been proven effective in the EU – such as tracking and tracing, and due diligence procedures – to be implemented as common practice around the world.  We believe the Protocol is a significant step forward towards creating a global solution for the problem of the illegal and unregulated tobacco trade.

It is concerning that, four years after its adoption, the Protocol has not entered into force. As the Protocol presents a promising framework to fight the tobacco black market around the world, this is a missed opportunity.”

Giustiniani added:  “PMI loses revenue every time an adult smoker in a high-price EU market, for example, buys one of our premium brands smuggled from low-price markets outside the EU, instead of through the legal channel in their own country. The Protocol includes many of the anti-illicit trade measures that PMI already adheres to, so it is in our interest to see these measures adopted globally. The illicit trade of tobacco is a complex problem that transcends borders and needs comprehensive solutions with all important stakeholders involved, including local authorities, the legitimate tobacco industry and the right security and law enforcement experts.”