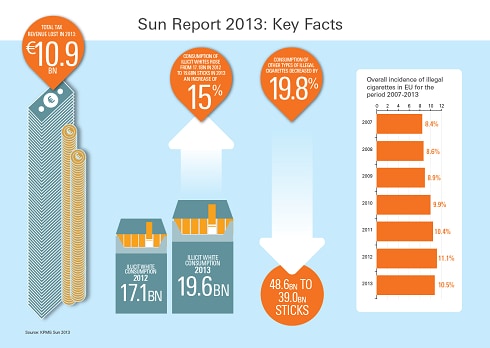 One in every ten cigarettes consumed in the European Union in 2013 were illicit, 33% of which were ‘illicit whites”, an emerging type of illegal, branded cigarettes manufactured for the sole purpose of being smuggled, according to a KPMG study. At these levels, EU governments lost approximately €10.9 billion to the illegal market.

KPMG found that while the number of “illicit whites” consumed increased by 15% compared to 2012, overall, the illegal trade of cigarettes in the EU stabilized, declining slightly from a record high of 11.1% in 2012 to 10.5% in 2013. This stabilization was due to a significant decrease in contraband cigarettes, legal cigarettes typically smuggled from low tax countries to high tax countries, as industry, governments and law enforcement increased efforts to curtail this illegal activity.

“The black market for tobacco is bad for business and bad for communities across the EU. It is encouraging to see the result of efforts to shrink this black market in the EU after it reached record levels in 2012.

“While a step in the right direction, more collaboration and enhanced focus on the part of industry, governments and law enforcement is necessary to eliminate this problem, especially in light of the rapid growth of new types of illegal cigarettes, like illicit whites, infiltrating the  market from outside the EU.

“Philip Morris International is committed to doing its part to turn the progress we saw in 2013 into a long-term trend in the EU.”

Despite the overall decline in the illegal market in 2013, the EU’s black market for tobacco remains a significant source of revenue loss for governments and a resilient competitor to the legitimate manufacturers and trade. This illegal activity not only comes with a financial cost, but it fosters criminality in local communities.

For the first time since its inception in 2006, KPMG’s study was commissioned by all four major tobacco manufacturers operating in the EU – BAT, Imperial, JTI and PMI. This allowed KPMG access to a wider set of data sources, which further refined and improved the completeness of the analysis. Prior to 2013, the study was commissioned by PMI as part of the company’s commitments under its Cooperation Agreement with the European Commission.