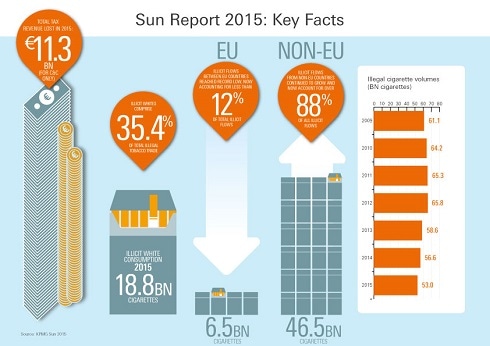 ‘We are encouraged by the latest trends identified in the report, which show that the joint efforts of governments, law enforcement agencies, manufacturers and retailers are working to slow the illegal flows of cigarettes in the EU. Despite this progress, one in every ten cigarettes consumed in the EU is still illegal. This underscores the need for more joint action, effective policies and broader awareness to continue to address the increasingly complex problem of black market tobacco.’

KPMG’s 2015 report shows that almost 90% of illicit products originate from outside the EU, which suggests that the EU remains the most attractive destination targeted by international criminal networks.  As a consequence, in 2015 alone, the EU has been deprived of 11.3 billion EUR in tax revenues.

The European Commission and Member States will decide the future of the current Cooperation Agreement between the EU, EU Commission and PMI to fight illicit trade which is due to expire in July 2016. With or without its renewal, PMI’s priority remains the measures contained within it. PMI’s ongoing commitment to continued efforts and investments around the world to tackle illicit trade remains intact and stronger than ever.

PMI also supports the World Health Organization’s Framework Convention on Tobacco Control (FCTC) Anti-Illicit Trade Protocol, which contains many of the measures in the EU agreement, and which will add global reach to a shared commitment to tackle illicit trade.